England centre-back John Stones, 26, is prepared to stay at Manchester City this season and fight for a place in Pep Guardiola’s team. (Telegraph)

Chelsea and England defender Fikayo Tomori, 22, is close to a move to Everton on a season-long loan. (ESPN)

United are monitoring Spain left-back Sergio Reguilon’s situation at Real Madrid after being told the 23-year-old is available, however their priority is still to bring in attacking reinforcements. (ESPN)

Arsenal have been offered France goalkeeper Alphonse Areola, 27, on a season-long loan from Paris St-Germain. (Mirror)

Aston Villa want to seal a quick deal with Arsenal for Argentina goalkeeper Emiliano Martinez, 28, so that he arrives in time for their opening game of the new season on Sunday. (Mail)

Sheffield United and Republic of Ireland forward Callum Robinson is to have a medical at West Brom. The 25-year-old is set for a permanent move to the Hawthorns after joining them on loan in January. (Sky Sports)

West Brom and Leeds have intensified their interest in a loan deal for Chelsea and England Under-21 midfielder Conor Gallagher, 20. (Mail)

Bournemouth have made a bid to take Tottenham and United States defender Cameron Carter-Vickers, 22, on loan. (Football Insider) 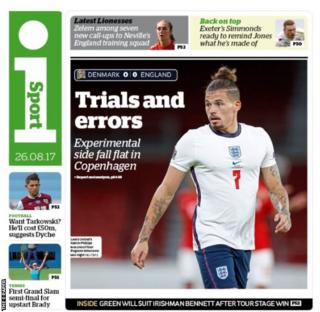 ‘Trials and errors’ – Wednesday’s The I Paper back page