Paris St-Germain have made a bid of £25m plus £5m in add-ons for Arsenal right-back Hector Bellerin, with Bayern Munich and Juventus also interested in the 25-year-old Spain defender. (Guardian)

Chelsea have given N’Golo Kante an £80m price tag with Inter Milan interested in the 29-year-old France midfielder. (Express)

However, former Leicester player Kante is keen to stay at Chelsea. (Goal)

Leicester have agreed a deal worth £22m to sign Belgium full-back Timothy Castagne, 24, from Atalanta. (Telegraph)

Atletico Madrid‘s Thomas Partey, 27, is keen on a move to Arsenal but the Gunners need to offload players before meeting the Ghana midfielder’s £44.5m release clause. (Goal)

Monaco have expressed an interest in Watford‘s French midfielder Abdoulaye Doucoure after Everton failed with a bid for the 27-year-old. (Evening Standard)

Newcastle are attempting to structure a deal for Bournemouth‘s Callum Wilson, 28, that would see Scotland winger Matt Ritchie rejoin the Cherries, but Aston Villa are also keen on the England striker. (Sky Sports)

PSG have made contact with Inter and Slovakia defender Milan Skriniar, 25, who is also a target for Tottenham. (Calciomercato – in Italian)

Crystal Palace have rejected an offer in the region of £20m for Norway forward Alexander Sorloth, 24, from RB Leipzig. (Mail)

Spain’s Kepa Arrizabalaga, 25, is prepared to stay and fight for his Chelsea place, even if the club are successful in signing a new goalkeeper. (Telegraph) 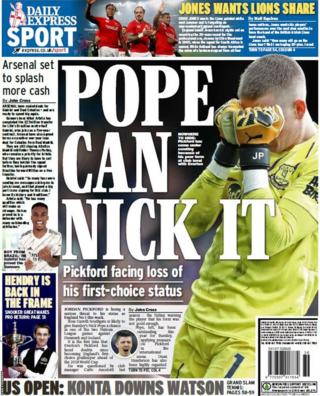