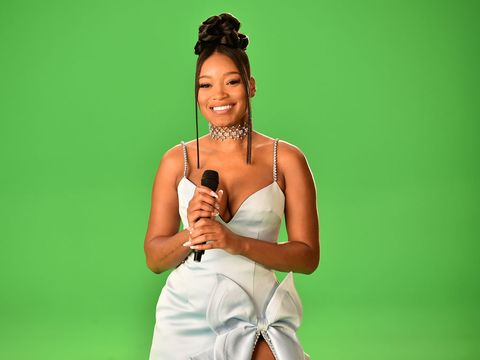 After dedicating the night’s performances to the late actor Chadwick Boseman, the 2020 MTV Video Music Award host Keke Palmer turned to current events: The Black Lives Matter movement that has swept across the country in recent months.

“With the Black Lives Matter movement, we’ve seen our generation step up, take to the streets and make sure our voices will be heard,” she said during the first moments of the show. “Enough is enough. What we just witnessed in Kenosha, Wisconsin, is yet another devastating reminder that we can’t stop. We can never tolerate police brutality or any injustice.”

She continued, “Let’s continue the fight to end systemic racism. The leaders of that movement are you, us, the people watching tonight…We need to come together. And music, music has that power. Music can help us heal. It’s all love.”

Palmer has been active in the movement since protests began earlier this summer and went viral for her inspiring speech at a Los Angeles protest in June. During the event, she urged members of the National Guard not to kneel in solidarity but to march with the rest of the protestors.

“I thought it wasn’t enough,” Palmer later told Cosmopolitan. “George Floyd died because somebody kneeled on his neck. I’m not looking for you to kneel. I’m not looking for a moment. I’m looking for us to stand together. If now isn’t the time to do it, then when is? Because there was a time when standing up to the slave master seemed crazy as hell too.”

Lauren Puckett
Lauren Puckett is a writer and assistant for Hearst Magazines, where she covers culture and lifestyle.